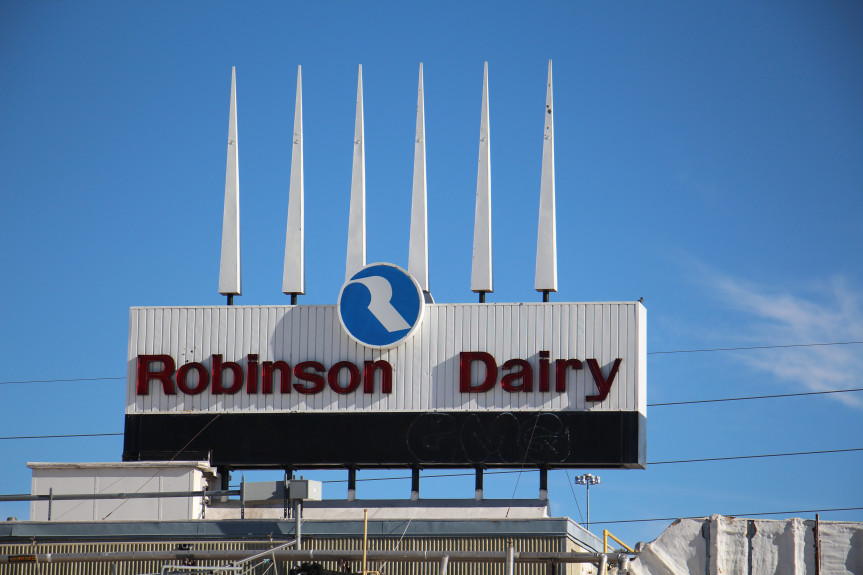 Now, five years after Robinson folded and shuttered its operations there, the dairy has been sold. Unlike many centrally located commercial properties that have changed hands in Denver in recent years, however, there are no major changes planned for the property — or its sign — in the near future.

Central Development this week announced it bought the dairy, which sits northwest of the Sixth Avenue-Interstate 25 junction, and neighboring office and warehouse buildings for $10.3 million. The 6.63-acre property has 97,987 square feet of building space.

The property is zoned for light industrial use, and Central Development executives say that’s what it will be, for now. The company will rename the area the Robinson Marketplace.

“We liked it because of its location. It has great access to Sixth and I-25 for distribution.The visibility, obviously, is incredible,” Central Development principal Jeremy Records told The Denver Post on Wednesday. “And it’s iconic. When you say Robinson Dairy, everybody knows where it is.”

Records said Central Development bought the property, in part, because of the momentum evident in the surrounding Sun Valley neighborhood. He cites the Sun Valley EcoDistrict project and plans for an entertainment district around the Broncos stadium.

But that doesn’t mean Central Development is looking to bring in a brewery or distillery right away and abandon the property’s food-processing and industrial roots. Dean Foods has a master lease there through summer 2019, and Records said his company has a good relationship with the three subleasing tenants operating there now. The property houses valuable cold-storage equipment, and with the city setting a sustainability goal of sourcing or processing at least 20 percent of its food locally by 2020, Records said the Robinson property is ideally situated to continue filling a valuable role when it comes to providing fresh foods to Denver residents.